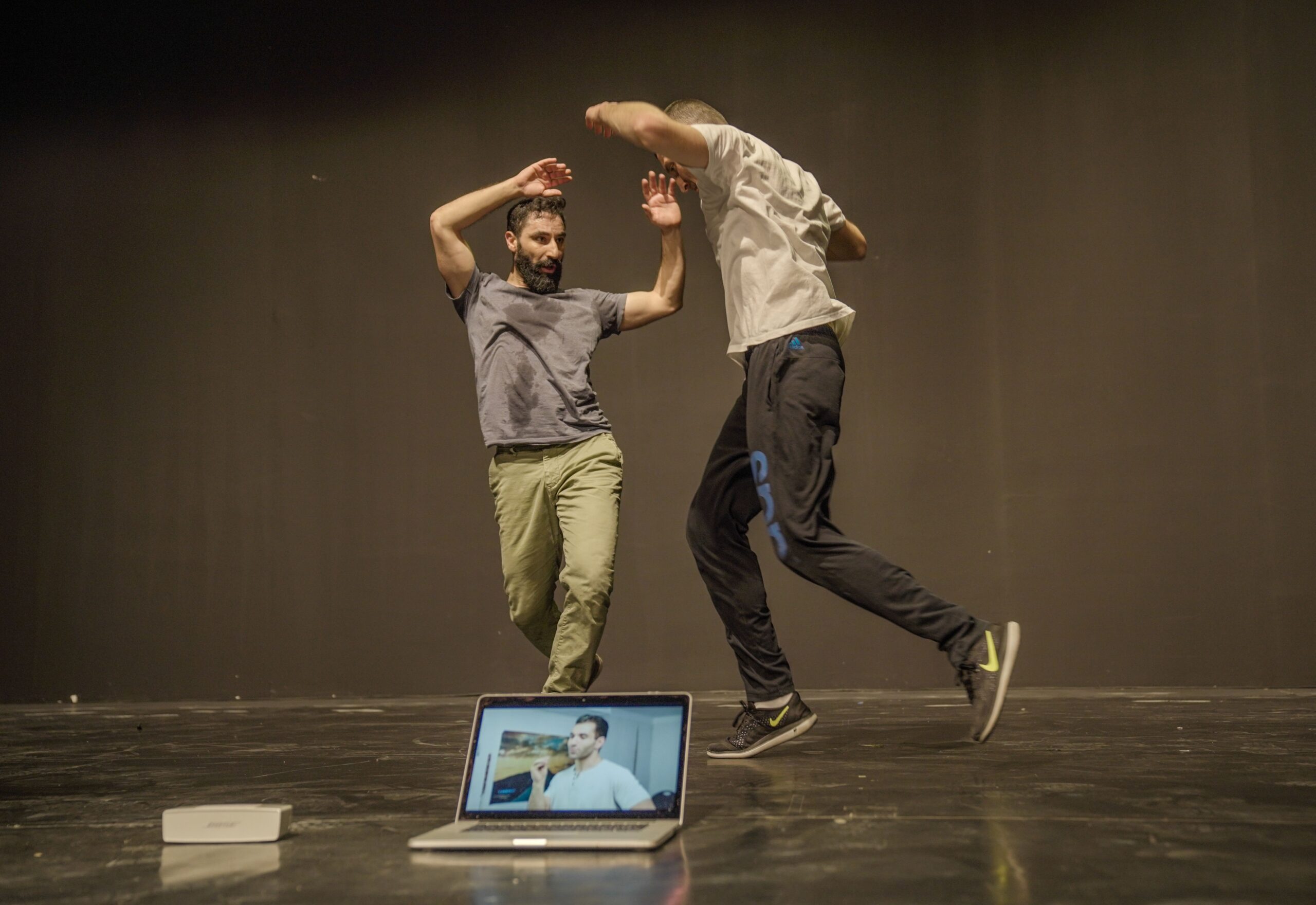 In this article, we will go over the most prominent contemporary dance performances that the Lebanese choreographer Bassam Bou Diab has participated, or created, or choreographed it. A number of dance shows that we will go through it, such as: “Under the Flesh”, “Eternal” and “Pina My Love” and “The Siege/L’Assedio” with Monica Ciarcelluti. In the following, we will get acquainted with the most prominent performances that Bassam presented, or that are under development.

Under the Flesh, is a contemporary dance performance that raises the question of the role of the body in situations of war. How can the body reaction to a death threat, originating from our survival instinct, transform into a dance?
A dance based on imaginary rules and techniques that have been meticulously conceived like a fairy tale that helps overcoming the war machine. A personal story is told, the story of a body that outlived four consecutive wars.

The work is anchored in a very specific political context, 4 wars that happened in the South of Lebanon in 1993, 1996, 2000 and 2006. Wars are never-ending in the Middle East and in the context of recent wars and the political migrations happening in Europe, Bassam believes that it is important to talk about the human aspect and the personal flesh experience when one’s life is under threat.
The aim at sharing this with the European audience, an aspect not spoken of on the news. The story of a true and painful experience of war situations outside the politics of it.

For 35 minutes Bassam Bou Diab and Ayman Sharaf El-Dien want to place the audience at the core of a death threat situation, throughout the choreography and the music and a storytelling narrated with a specific humor.
To complete this dialogue the performers also engage in a (Q&A) session following the performance. It is also possible that Bassam gives sometimes, a workshop that would explore the movement techniques that describes in the performance, and mix that with some folklore techniques with live music.

The performance revolves around the presence of the dancing body, in the revolutions of the Arab Spring, as a political movement that stands in opposition to the existing social and political regimes. It shows the ability of this body to create a rebellious state against these radical systems. This is shown through physical positions and dance movements that are capable of generating a sort of power that can be soft and peaceful, but at the same time influential and captivating to revolutionary communities.

The research of movement focuses on the abstraction of these gestures, and their relation with the music, the cheers, or the songs. It deciphers the symbols and represents them in the form of a contemporary physical theater performance.

A dance-theatre play, an experimental and intercultural artistic project where the dialogue between east and west is at the center of the scenic creation. The fusion of artists from different countries and cultures among which are lebanon, burkina faso, italy, argentina and romania, becomes key to sharing and discussing different themes of oppression.

lebanese choreographer Bassam Bou Diab, and under the direction of monica ciarcelluti, the theater company has carried out a careful study of the gestures from ritual origins of different cultures and in particular focus on the arab world, its religious celebrations and its music traditions. Can these gestures transform into individual and collective actions? Can they depict the world of the victims of a siege, oppression or exclusion?

L’assedio/the siege is based on a gestural grammar an language that draws its base from islamic religious
rituals (Prayer, Sufi dance and Ashura) and from their fragmentation, up to joining them in a dynamic form of art accompanied by music. Music becomes an expression tool in a drama combination centered around two fundamental elements, from the classic Greek drama: the chorus and the hero and the evolving relationship between these two. The scenic writing is based not only on the actions and movement but also on the word, sound and voice use through linguistic polyphony. The texts included in the drama come from rewriting of Sartre, Brecht, Camus, Euripides and of current texts of the political and media world.

The meeting between Monica and Bassam. The beginning of their artistic dialogue originated from the need to answer these questions: what is the contemporary idea of europe/western and of non europe/east? Who are the winners and who are the losers nowadays? From these thoughts the scenic writing is born, both through the word and through the study of gestures. How can the religious rituals transform into actions and movements that fuse and transform into individual and collective reactions?
An existential work, which reminds of Sartre where ideally there are no leaders and movements are born spontaneously and where the fight is always the result of a collective action.

The Italian word Incontro means meeting, the etymology originates from the Latin popular incóntra, composed of the prefix in- (reinforcing) and contra = opposite, against, in front of. A meeting, an encounter confronts us with two forces, which at least one moves towards the other (etymologically, ‘against’), but they are directed towards each other to reach the presence of someone or something. Lebanese choreographer Bassam Abou Diab and Italian Jacopo Jenna create a dialogue between their different choreographic practices to generate an open debate on cultural diversity as a trace of possibilities and an element of definition of the body through movement.

This series of encounters between the two artists is looking for strategies of body meeting through different elements like proximity and mimesis to identify crosscultural variables of body attitude and movement qualities.

A prison strongly represents a direct and powerful sentence of punishment and a forced limitation of freedom, and human space. However, in addition to that, totalitarian regimes have used this tool to subjugate free speech through intimidation and torture.
Bassam Bou Diab brings back his own personal story of imprisonment and pain in an attempt to expand on the situation of prisons and the inhuman brutal practices that the prisoners are subjected towards. As a dancer, considering his body the most important means of expression, how did such an experience
change his perception of it, its movement and reactions. In a world of fantasy and stylization how would that body process the means to find its way into the supernatural; to survive the pain and change it into dance in order to fulfill its first and foremost dream.

“Pina my Love” is a contemporary dance performance that examines the psychological and physiological defense mechanisms that the body creates when subjected to torture, in order to preserve its existence, cope and adapt to its new state.
The totalitarian or capitalist regimes or other regimes under several names, especially in our Arab regions, aim to break the will of the rebels against it, those who oppose its policies, and the deviants from what is previously decreed, by harming the body as the primary incubator for ideas. They specifically resort to suppressing freedoms through imprisonment, then torture and direct physical intimidation with the aim of transforming the body into a paralyzed voluntary tool that they can control.